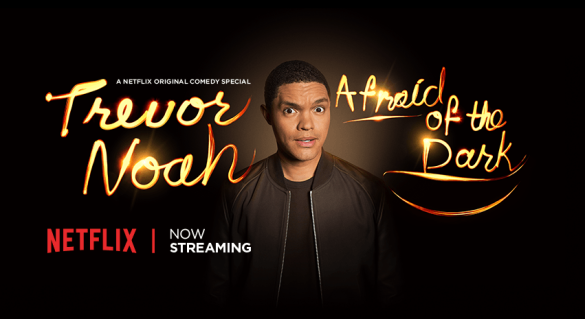 This weekend I watched Trevor Noah’s stand-up special, “Afraid of the Dark.” I have very little credibility as far as comedic writing goes, but I do have a degree in creative writing under my belt, neighboring a pretty solid appreciation of stand-up comedy. Consequently, this review will focus on the art of storytelling, some basic style-choices of stand-up, and personal connection.

Blessedly bypassing the tacky intro-skit most stand-up shows have, it begins smoothly with his New York story, followed by memories he has of a couple black Americans. Both stories serve not only as a little introduction to Trevor, but also to Trevor in America. His cross-cultural wit always seems [in all his shows] to be a rather intimate side of his humor, and so revealing of his character. And his character, even in the oft-comparable slew of popular stand-up comedians, is refreshingly unique.

He then pays loving homage to Eddie Izzard with an amazing bit about British colonialism. Throughout the show, he continuously puts on very skillful accents, and now he whips out a couple to demonstrate the ridiculousness that is colonialism. This part in particular made me think that he could totally make all of his stand-up specials into a series given the recurring title, It’s Funny Cuz It’s True. Regardless, Trevor’s words contain a refreshing note of authenticity that make it impossible to ignore the truth; so we laugh, our defenses loosening, and simultaneously we nod, feeling sad and regretful and defensive. It’s an amazing contradiction—a response I’ve never shared with anyone else, famous or not.

After a little spiel about the importance of traveling, he shares an epiphany he had about Scotland, (“a country where they speak no English” XD), and James Bond. I have no qualms with James Bond, and have seen them all growing up with my brothers, but I wouldn’t call myself a fan, and still, this skit was SO FUNNY! Seriously, how do you make geography lessons, (because basically, that’s what it was ;), so entertaining?! Still set in Scotland, doing stand-up shows there, he tells about an experience he had, resulting in his ethos and logos concerning the female body. I dearly hope that his good sense teaches many a viewer a thing or two.

Then he muses on how one’s tone of voice can affect his/her future and others’ perceptions of her/him. To demonstrate this idea, he explains how [the silly side] of his imagination pictures the Obama-Mandela meeting. The whole bit is interesting, moving, adorable and a riot. It’s made me consider how truly incomprehensible the extent of our power is, even of people like me, who don’t have full control over much of their body.

Segueing beautifully, he slides into a piece on accents, and how native speakers interpret their language being molded by an accent. Growing up in two families made up in part with foreigners, but not being multi-lingual/accented myself, I feel very close to the issue. And accents/languages, which are nearly as bewildering to me as they are familiar, do not change anything about a person. Just wanted to reiterate that, in case anyone doesn’t watch/understand Trevor.

Now that I’m done with my informal analysis, let me just say that I thought the special was hilarious. The humor was smart and thought-provoking, and it almost always exaggerated just enough. Conversations/pantomimes were always clear. My favorite one of these was in his “wee little” story, where the conversation emerged between himself and his body. I have [silent] conversations with my body all the time, which made it even more hysterical and awesome. My final general note: I have nothing against swearing or most curse words. My favorite—damn—is debatably a curse word, and even it I barely use. In comedy, stand-up included, I hardly ever think swearing adds humor. Maybe Trevor shares this belief, but whatever the reason, he didn’t swear! Well, not really. The two possibly inappropriate words that he used either are used in society or were used by him so colloquially that I’m not sure they could be bad. But still. Thank you, Trevor, for giving everybody’s ears a break. And for your sense of humor. And for sharing.